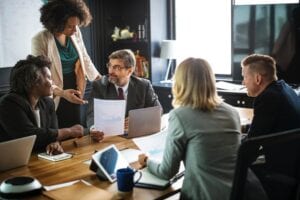 When you’re starting out in your career, you have student loan debt and very little in the way of finances to support career risk-taking. So you think to yourself, “I’ll gain skills, experience, and a solid financial foundation. I’ll put myself in a position in a few years to have options and to be able to take risks.”

“…women’s readiness to take risks declines as they become more experienced in their careers – even as their self-confidence grows. Forty five percent of respondents with less than five years’ experience say they are open to taking big risks to further their career, versus 37 percent with 15+ years of experience.”

The study found a disparity between the perception of the rewards of risk-taking and the willingness among women to actually take career risks. While 55 percent of women believe taking risks enables career progression, and cite benefits ranging from building respect to getting promoted, risk-taking ranked near the bottom of respondents’ lists of what contributed to their success. Consider that 73 percent said working hard was the #1 contributor to their success, and just 8 percent said being a risk-taker helped. The contributing factors that women cited for their achievements were task-oriented, rather than self-assertive.

The Risk-Taking and Confidence Correlation

Underlying much of the study’s findings was the central theme of a modest female ego in the workplace. Respondents rated themselves as confident in taking on new projects, but less so in talking about accomplishments. A strong correlation was shown between confidence and assertive self-promotion in order to raise a personal profile at work and achieve recognition. Women who rated themselves as extremely confident were 22 percentage points more comfortable promoting themselves and 25 percentage points more comfortable asking for a new position.

Fears of Negative Perceptions Cause Caution

When asked about where their risk-taking concerns come from, 41 percent said looking like they don’t know as much as they should, 40 percent said being ignored or not taken seriously, and 37 percent said failing at something they try. Prior failures have deeply impacted willingness to take similar risks going forward in 86 percent of the respondents, yet 70 percent say they are resilient when they fail at something.

Given the importance of confidence, perhaps the most startling and important finding in the report was that only 22 percent of responding professional women say their parents instilled in them the value of self-confidence.

Confidence helps, but specifics would help more – and the report concludes with some very explicit suggestions for overcoming risk-taking fears in order to realize the rewards. “Make a conscious effort to ask for what you want” by developing self-knowledge and articulating motivations and needs. “Be aware of the impression you make” by using body language and tone to advantage.

If you’ve got your Nikes on, you’ll appreciate the report’s last bit of wisdom. “Finally, take risks. No risk, no reward…. Think like an athlete: they face failure every day but quickly learn to recover and move on.” Essentially, when it comes to taking risks, Just Do It.

Has fear of risk-taking held you back in your career? Do the findings of this study resonate with you, or do they surprise you? Share your feedback with us on Facebook!